A runny nose, sneezing, and stuffiness are common problems associated with allergic rhinitis. They can be caused by infections, allergies, non-allergic nasal disease (vasomotor rhinitis), nasal polyps, deviated septum, chronic sinusitis and other difficulties.
Allergic rhinitis, often referred to as hay or rose fever, can cause:

Note: Hayfever does not cause a fever.

In our region, seasonal allergic rhinitis is caused by tree pollen in the spring (April and May), grass pollen in early and midsummer (late May, June, and early July) and weed pollen, primarily ragweed, in late summer and early fall (August and September). Learn more about fall allergies.

Molds, which can also cause hayfever, appear in the warm months, usually from early spring until later fall.

Small, benign (non-cancerous) tumors in the nose can sometimes cause a runny nose and stuffiness. If nasal polyps grow large enough, they can block the nasal passages. A sinus infection can develop if the polyps obstruct sinus drainage. In rare cases. severe infection and large polyps can cause the bones surrounding the nose and sinuses to wear away.

THREE STEPS TO RELIEVING
YOUR ALLERGIES

Having allergies can be downright miserable!  However, you might find yourself asking, “Is it allergies that’s causing me or my child to be sick?”  Oftentimes, the symptoms associated with allergies, the common cold, and sinus issues are similar. But before jumping into allergy treatment, you first need to determine the problem and the best path of action.  We recommend a three-step process. 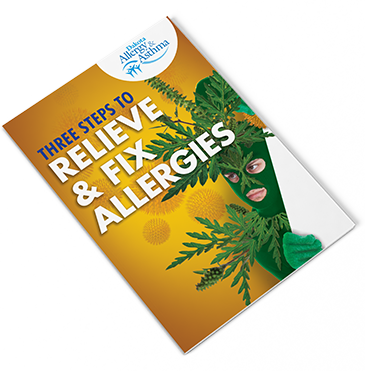